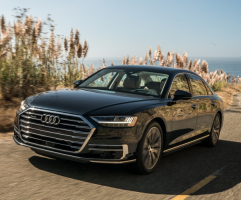 Loose seals in the A8 and S8 engine bad can come lose and start a fire, propmting a recall.
The automaker says it only happens in "rare cases" but is that true? The problem happens when a wire helix inside the seal deforms from normal engine tempterature changes. Once that happens, the whole seal can fall off due to normal engine vibrations. Doesn't sound as rare as they say it is.